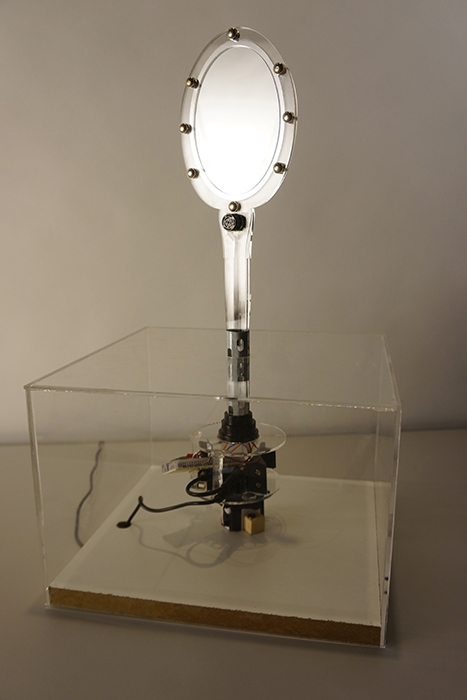 Vanity, enumerated as a lesser sin in some circles, is the fawning pride one has for one’s abilities or looks. Much unhappiness has been brought about because of wandering eye or the insufferable wondering about one’s outward appearance. Competition for the eye has always seemed to plague humans, but it also wreaked havoc amongst the ancient Greek gods on Mt. Olympus. In their idyllic abode, it sowed such discord as to lead to the siege of Troy, which in turn brought about the downfall of Paris, yet ultimately established the city of Rome and the beginnings of Western civilization.

τῇ καλλίστῃ (Greek for: ‘te kallisti’ — to the Fairest) is an approach—at least an effort—at mitigating the eye of the semi-vain, or overly self-conscious.

Employing simple interactive Arduino components, this work invites the interactor to try and catch a glimpse of their reflection in the mirror set atop an acrylic case. As they approach the device, a range sensor sets off a reaction that causes the mirror to turn away from the participant. Try as they might, the interactor is continually denied the opportunity to view likeness, and thus, the narcissistic sin is averted.