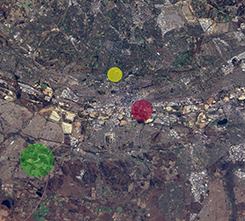 Diane Derr and I were invited to conduct a workshop based on our research into visual narrative in Johannesburg, South Africa during Fak’ ugesi: Digital Africa Festival in December 2014 hosted by the University of Witwatersrand. During this event workshop participants mapped out sites of cultural, political, and economic significance across the city on the one-year anniversary of Nelson Mandela’s death. With the collected and collated data, they then used the results to produce an alternate map and experiential narrative of the city of Johannesburg.